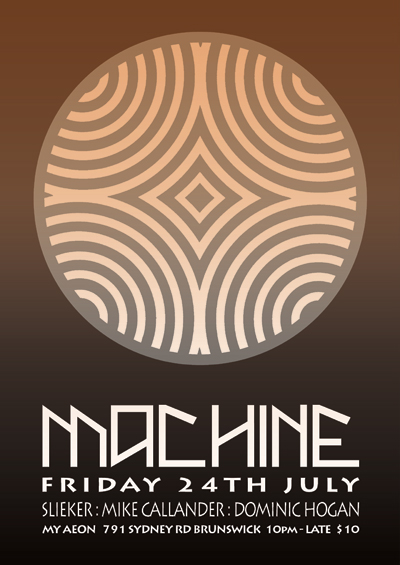 3 Dj’s x 3 hour sets…allowing each Dj time to craft the night with the music they want to play.

SLIEKER –
A career behind the decks spanning 16 years has taken Simon around the world, around the country and certainly inside every nook and cranny within Melbournes healthy electronic music scene. Talented and diverse, Slieker continues to forge ahead with a hectic schedule into 2009…
His prominent achievements have been a lauded 8 years throwing down at infamous techno institution Teriyaki Anarki Saki. Teriyaki one of the most respected techno clubs in the world, known for it’s quality, and crucible like intensity was where Slieker came to prominence.
Possessed with a balance of skill and sensitivity, Slieker draws upon the subtleties which can turn a set into a cohesive aural journey. Not only does he recognize such amorphous qualities as depth, scope, timing and intensity, he manipulates them as surely and deliberately as a shift in the pitch. And then theres the feeling with which he does it. With Slieker its personal, he touches people. In the simplicity of that assertion lies the strength at the heart of his djing. It;s not abstract or isolated, rather something borne of a relationship with the dancefloor. A relationship that often intensifies the energy in the room.

MIKE CALLANDER –
Mike has held long-standing residencies at some of Melbourne’s most important clubbing institutions such as Sunny, Fokus, and Nano, and currently at Poison Apple and Pretty Simple, but perhaps his most treasured residency was at Honkytonks, for which he also recorded a mix CD The Last Dance that made its way into record stores across Australia and as far away as Japan.
Since then Mike has toured all across Australia and New Zealand, and as far afield as Berlin, Los Angeles, Madrid and Malaysia, playing alongside artists as diverse as Mathew Jonson, Michael Mayer, Radioslave, Agoria (at Berlin’s Watergate), M.A.N.D.Y (both in Melbourne and Berlin), Alexkid, Optimo. Steve Bug, Sven Vaeth and Mr C (in Melbourne and Berlin), plus bands such as Fujiya & Miyagi (in Madrid), Booka Shade and Trentemoeller.
Mike’s DJing has also earned accolades from countless touring international artists, with many labeling him one of Australia’s finest – most notably Get Physical’s DJ T., who invited Mike to play in Berlin at his anniversary event to celebrate 20 years of DJing.

DOMINIC HOGAN –
DJ Dom Hogan has presented the longest running electronic music show on Australian radio. Creative Alternative Techno. It has been on the air waves since 1993 on 106.7 PBS FM. He was a major musical influence to the early Earthcore parties and Dom is constantly twisting them up in dodgy warehouse parties all around Melbourne. A bit of a Johny come lately to The Rainbow Serpent parties but has done a chill thing with those guys for the last few years. Dom was honored to be the first DJ to play “the prayer for peace” in Melbourne at the first Earthdance party many years ago and has played along side some of the greats blah blah blah lick lick lick. He has also released 3 full length Albums and one ep as one half of the very mysterious and psychedelic music out fit called Lumukanda through the legendary Melbourne electronic music label Psy-Harmonics, toured Europe back in day, and so has bummed around with those types since Psy’s conception. Dom is also really bad at writing his own bio’s and talking about himself as the third person so is going to stop now.
All you got to know is that I’ll take you on a journey and you will leave the main frame for a while.

A Big Thank You To Our Sponsors

Zen Paradox – The Light At The End…?